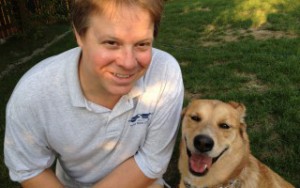 Our dog Brandy is a rescue that came from a troubled past. She was obviously abused and sustained mental injuries that presented itself with, at times, intense fear aggression. She had bitten on quite a few occasions, yet she would be extremely loving in between the occurrences. I didn’t want to give up on her, though at times it hurt me to contemplate it. We tried training previously that unfortunately didn’t get us to our goal.

Once Susan got on the scene Brandy learned to no longer be concerned with the fear that caused her to fight instead of flight. Her confidence began to soar without the fear attached. I learned the needed skills and tools to teach Brandy to display predictable and reliable safe behaviors.

Susan had an intense personal commitment to seeing my Brandy succeed so that she can stay in my home permanently. Now that we have been working with Susan, the past few months have shown great improvement, resulting in a much calmer, less anxious dog.

Now that I have the skills needed, I can sustain a life with Brandy that centers around a constant state of training her correctly under new conditions and distractions.

Problem Solved Dog Training was the right choice for Brandy and the humans that love her dearly.

Thank you!!
Rich, Barb and Brandy